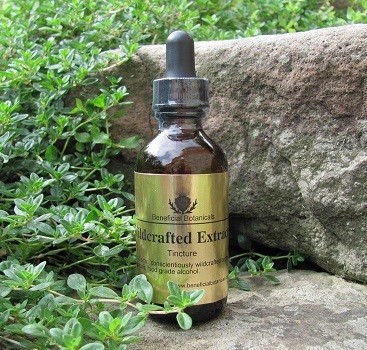 Known as the "King of Medicinal Mushrooms" and "The Immune Boosting Superfood", Chaga has consistently scored at the highest end on the ORAC test for antioxidant potency of most any super food.

Noteworthy Chemicals and Compounds include polysaccharides, Beta-D-Glucans, phytosterols, Betulin and Betulinic Acid (triterpenes), polyphenols, and Super Oxide Dismutase (a group of enzymes). The betulinic acid found in Chaga comes from the live birch trees where it grows and is most noted to normalize the body's cholesterol levels while serving as an anti-inflammatory agent. Betulinic acid has been studied for its antiproliferative activity on cancer cells. Research is being done to determine just how betulinic acid can best be delivered in cancer treatment, addressing the problem of its poor solubility in certain solutions.

What is a Double Extraction Method? In order to extract both alcohol and water soluble chemical compounds from this type of fungus, a dual method of extraction must be used to capture all the health benefits it has to offer. This process requires soaking the mushroom material for a period of time in alcohol followed by a hot water decoction for optimal extraction.

Known Dose (for Adults): 15-30 drops 1 to 3 times a day in coffee, smoothies, juice or in a small amount of water, with or without food. May be used long term. See precautions for exceptions.

Like other polyspores, Chaga contains polysaccharides that stimulate the immune system. As well as being identified to enhance the immune system, research has also indicated that Chaga has the ability to regulate blood pressure, glucose, insulin, and both serum and liver lipids, such as cholesterol, triglycerides, and phospholipids.

Chaga has been studied for its role in regulating cytokine production which may classify it as an anti-inflammatory to fight chronic inflammation that can lead to other problems and diseases.

Because chaga lowers blood sugar, it can be dangerous for people taking insulin and other blood sugar-lowering medications. Due to Chaga's blood thinning action, stop taking Chaga two weeks in advance of any scheduled surgery. Do not take Chaga if you are on blood-thinning medications such as Rivaroxaban (Xarelto), Dabigatran (Pradaxa), Apixaban (Eliquis), Heparin (various), and Warfarin (Coumadin).

"Thanks so much for your chaga tincture, which I have been using recently. Two months ago a squamous cell carcinoma was surgically removed from my scalp by a dermatologist. Squamous cell isn't melanoma, but it can be very dangerous. (Every year for the last five years or so, my doc has had to freeze around fifteen pre-cancerous lesions to prevent their possible further growth toward malignancy. I'm 72 years old and had begun to think maybe this is inevitable at my age.) After my surgery, I read about chaga and its use in the treatment of squamous cell carcinoma. Six weeks ago, I started using chaga prophylactically. Today I saw my dermatologist, and for the first time in around five years there were NO lesions anywhere (!), let alone lesions that needed freezing! Two lesions on the back of my neck were for many months repeatedly scabbing and bleeding, until five weeks ago. Today I asked my dermatologist to freeze those lesions: I was extremely concerned about them even though I'd barely noticed them these last four weeks. She said "OK" and looked for them. The lesions were gone. There was absolutely no trace of them. I could hardly believe it. Besides the bleeding lesions that had seriously worried me, there had also been for several years lesions on both shoulders that appeared more "stable"---they itched but didn't bleed---but which nonetheless worried me somewhat because they wouldn't heal, even after years. They too are gone. Yes, my story is "only" anecdotal, but for me chaga's apparent effect is miraculous and a huge relief. Thank you, God/Goddess for our amazing plant friends/helpers/angels. Be well, everyone." ----Frank W. from New Mexico

These statements have not been evaluated by the Food and Drug Administration. The information provided here is intended to supplement, not substitute for, the expertise and judgment of your physician, pharmacist or other healthcare provider and should not be construed to indicate that the use of this herbal product is safe, appropriate, or effective for you. Consult your healthcare provider before taking this herbal product.