Addressing Lyme disease beyond superficial treatment requires an understanding of cytokine cascades and the likely interactions between the coinfections.

There are three primary areas of focus for treating Lyme Disease:

1) The endothelium must be protected. This is the lining of the interior surface of the blood vessels and lymphatic vessels. There are a number of substances that will protect the endothelia, but Japanese Knotweed Root (Polygonum cuspidatum) tincture is the most important.

INFLAMMATION & THE CYTOKINE CASCADE
The most important thing in treating coinfections is to reduce the inflammatory process the bacteria initiate, basically by counteracting the cytokine cascade they initiate. That stops pretty much all the symptoms right there especially if treatment protocols are also begun that are designed to protect the areas of the body that are affected. The bacteria can’t survive if they are not able to initiate their particular form of inflammation in the body; it is how they make habitat and scavenge food. 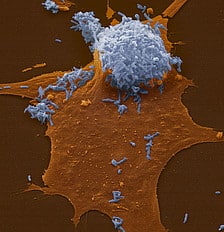 BARTONELLA
Bartonella bacteria are gram negative (have a double cell wall), are slow growing, come in different shapes, and are very difficult to isolate in the lab. They can live inside cells lining blood vessels and in isolated locations in the body, protected from the immune system and antibiotics. Types of symptoms are related to the organs involved. Typical organs that can be affected include the liver, spleen, bone marrow, eyes, skin, and the entire vascular system including the heart. If the person’s immune system is healthy, the cells of the immune system quickly gain control. Bartonella is thought to occur as a coinfection in at least 25% of Lyme disease cases. Antibiotic resistant bartonella are common and because the microbes are slow growing, occur in low concentrations in the body, and concentrate in areas where antibiotics do not penetrate, non-responders are common. Many people who do respond relapse later. With regard to having a “herx reaction”(an overload of bacteria released into the blood stream for the immune system to handle), bartonella bacteria have a very low potential to cause Herxheimer reactions. The outer coat from dead bacteria is much less reactive than most other bacteria involved with Lyme disease. Bartonella bacterium does not form biofilms, but can form vacuoles that are similar in the liver. Generally vacuoles are broken down by the body when healing occurs.

A broadly systemic plant, Japanese Knotweed Root modulates and enhances immune function, is anti-inflammatory for both arthritic and bacterial inflammations, protects the body against endotoxin damage, and is a potently strong angiogenesis modulator, highly protective of the endothelia of the body. Its constituents cross the blood-brain barrier where they exert actions on the central nervous system: antimicrobial, anti-inflammatory, as protectants against oxidative and microbial damage. It is highly specific for bartonella infections and good, but of less importance, in mycoplasma infections.

Japanese Knotweed Root is a very strong inhibitor of cytokine cascades initiated by bacteria. During Lyme infection, for instance, there is a spirochete-stimulated release of a number of matrix metalloptroteinases (MMPs) which occurs through a particular grouping of pathways. While there are a number of herbs that can reduce autoinflammatory conditions stimulated by MMP-1 and MMP-3 (for example Curcumin), the only herb that specifically blocks MMP-1 and MMP-3 induction through three particular pathways is Japanese Knotweed Root.

Japanese Knotweed Root enhances blood flow, especially to the eyes, heart, skin, and joints. This makes it especially useful in Lyme and its coinfections as it facilitates blood flow to the areas that are difficult to reach to kill the organisms. The plant’s compounds easily move across the gastrointestinal mucosa and circulate in the bloodstream.

Japanese Knotweed Root is an angiogenesis modulator, stimulating the formation of new blood vessels and the healing of damaged ones in areas such as burned skin, but also stops the development of new vessels and blood flow in areas where it should not occur, such as in malignant and benign tumor formation. It maintains the blood vessels themselves and as part of this action, has specific modulating and protectant actions on the endothelial cells that line the blood vessels.